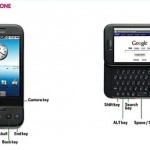 A while back, Google opened up their cell phone OS (Android) to programmers so that it when it was release there would be apps ready for people to use. Thus, encouraging people to buy the phones.

The first phone out is form T-Mobile called the G1. Mid last week the phone was officially announced with the flair you would expect from excited developers and not from the marketing group.

It appears the phone is actually a month from shipping to purchasers. This initial phone has a touch screen with several hard buttons to assist jumping to often used apps. As well, a slide out full keyboard. Interesting enough, two items hit me right off… to zoom in/out you have to use buttons and the keyboard isn’t the size of the unit so your reaching over the top of the lower hard buttons to type. Will need to play with the hardware to see if those are ‘real’ issues. Till we have a unit to do a full test on, you can review the getting started manual here: