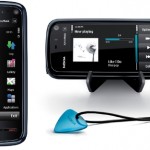 As the name implies, the new device is heavy on the music play/manage side of feature set. 81 Megs built in with a MicroSD card slot (8 gig card included) will get used up quickly with the “first year free” access to Nokia’s entire Music Store catalogue.

The ‘Media Bar’, accessed through the 5800’s 3.2 inch widescreen display, is a drop down menu system. Providing users with quick access to their music, their Web browser, as well movies. Audio output is via a 3.5mm jack and Built-in surround sound stereo speakers. And videos can play at 30 frames-per-second, up to 16 million colors, with an aspect ration of 16:9.

The built in 3.2 megapixel camera can record pictures as well as video (video recording is a lacking feature on the iPhone and Treos)