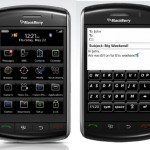 Blackberry Storm, hopes to be your ‘everything’ phone.

Blackberry (RIM) has released their new ‘all-in-one’ phone that looses it’s keyboard and scroll wheels. All the power that makes a Blackberry what it is know to be, but guided by your finger. A touch screen Blackberry, that does everything you expect without being a phone that can “do what a Blackberry does”.

If you have a Blackberry, most likely for work, you will recognize the feature list: Wireless push email, Organizer, Browser, Phone, 3.2 mp Camera, Video Recording, Maps, Media Player, Polyphonic MIDI and MP3 ringtones, GPS, SMS/MMS, Corp Data Access and can be used as a Tethered modem. Wrapped into… one of the largest Blackberry phones you have seen – 4.4 x 2.5 x .55 inches.

My first glance was of horror as I saw the on screen keyboard pop up with their dual letter keys like on the Pearl. These are fine if you type watching the screen closely so you see the system attempt to guess your words – which can result in quicker emails. I was relieved to read that there is a regular QWERTY keyboard in Landscape view for people like me who need to type with only one eye on the keyboard and the other on the hall in front of me.

The color screen is a TFT LCD, “High resolution” at 480 x 360 pixels. Seems a bit “Low resolution” to me when compared to the other choices reviewed previously here. The BIG excitement for real users is the Force-Feedback. Blackberry is amonst the first to market with a touch screen that tells you that you touched something other than a change on the screen!

I can see the 1 gig of internal memory (upgradable via a microSD card slot) getting used up pretty quickly with all of the supported media types now supported: Video formats: MPEG4 H.263, MPEG4 Part 2 Simple Profile, H.264, WMV – Audio formats: MP3, AAC, AAC+, eAAC+, WMA, WMA ProPlus. Speaking of audio, I’m happy to see the speakerphone is still included, no one seems to do that feature as well.
Factory site link