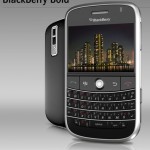 Rather than a list of ‘features’ for the Bold, I thought it was best to compare to what many readers already have in their pockets, the 8300 (Curve).

The keyboard is similar to the 8800 where the keys touch each other have a slight rise in the corners – love it or hate it, people seem to be in two camps over this. The screen has jumped up in pixels, enough to notice right away. Curve 320×240 – Bold 480×320. This does bump the hardware up a touch in size which I notice in my hand but not with either device in my pocket (I do not use a belt holder). The Bold is thinner yet wider and taller, both by .2 of an inch.

Video recording, at half VGA resolution, has been added to the same 2 Megapixel camera as the Curve. Both have GPS (although, the Bold has moved away from AT&T Navigator to BlackBerry Maps). As with the 8820, the Bold has increased connected ability via Wifi a/b/g (‘a’ instead of ‘n’? Might be a corporate market RIM was going after). The Bold also has 1 gig of memory built in, the Curve has 128 megs. An important upgrade from the standard microSD slot is the added feature of microSDHC.

Lastly, is data speed. The Curve has been using the 0.2 Edge network, while the Bold jumps up to the 3.6 HSDPA zone. This will make a huge difference if you tether your Blackberry to your notebook to use it as a internet connection.